Alright, it’s only taken 5 weeks to finally name all of my chickies, but I’ve never been one to rush things, people.  I’ve included updated pictures to commemorate the event as well.

“Roxy” (Barred Plymouth Rock) -she’s such a poser and the friendliest of the bunch. 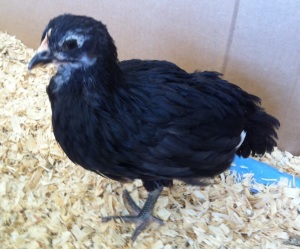 Esmeralda, AKA “Ezzie” (Black Australorp)-scared of her own shadow, but getting      better. 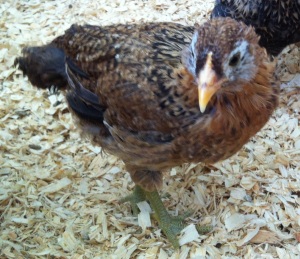 Cleopatra, AKA “Cleo” (Easter Egger)-she’s my spunky one with the green T-Rex feet. 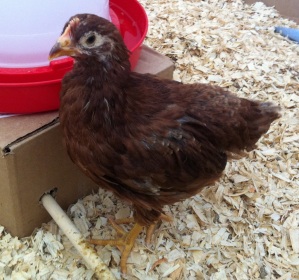 “Penelope” (Golden Laced Wyandotte)-she’s another scardy-cat, but if you pick her up and hold her for a bit then she doesn’t want put down right away. LOL! 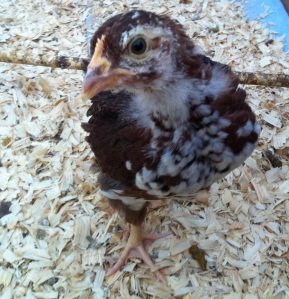 Lady “Phoebe” (Speckled Sussex)-she’s my inquisitive gal, always curious about everything.  When I’m trying to take pictures she’ll stick her face right in the camera trying to figure out what it’s all about.  I have so many up close face shots of her.  She’s hilarious.

As I type this they are 5 1/2 weeks old, still inside the house in their brooder.  I’ve now turned off their heat lamp during the day and just have it on over night.  They still seem to like it on while they sleep.  The dust they kick up is amazing and I’m starting to feel ready for them to fly the coop, or brooder in this case, so I can thoroughly clean that room.  Their coop is now stained and awaiting a final security latch to be put on, then we plan on setting up their run and getting everything in order for their life outside.  I’ll probably miss having them so close by, but I’m excited to see how much they’ll like the outdoors with so much more space to run and play. 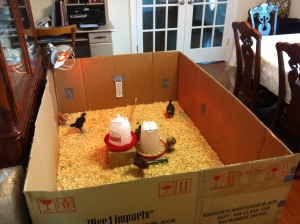 Hey, all!  Here’s a picture of the girls upgraded brooder condo that my hubby put together last week.  They are loving it!  My chicks are much bigger in size now at 4 weeks than what they look like in this picture.  Still can’t get over how fast they grow (I swear overnight).

Today I found my Easter Egger, Cleo, perched on the top edge of the brooder box just looking around not sure of what to do next.  We think she got there after flying on top of the feeder.  We’ve now put an old mixing bowl on top of the feeder (slightly slanted) so if she decides to try to fly up there again it will be too slippery for her to stay perched on top.  Hope it works because she’s one of three chicks who we’ve seen standing on top if it at one time or another.  That’s all I would need-  3 escapee chicks running around pooing all over my floor!

Just had to share this picture of my 2 1/2 week old barred rock.  She is such a nut!  She now thinks she’s queen tut perched upon her throne looking down at her followers.  The other chicks will come over and look up at her and start pecking at her feet as if to say, “keep dreaming, toots!” 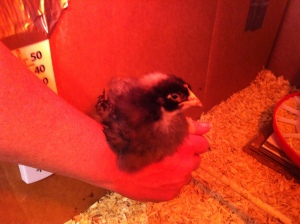 Here’s one more picture- just because her face is so priceless! 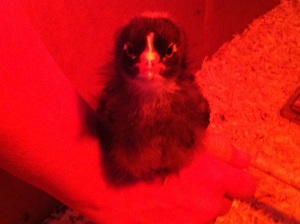 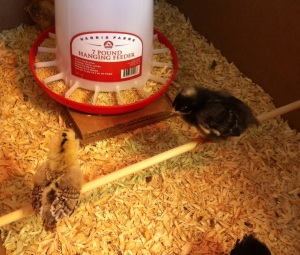 Boy, oh, boy, they weren’t kidding when they said that baby chicks grow fast! I’ve had my brood exactly a week today and I can’t get over how much they’ve grown.  Their wings have developed so quickly and they act more like birds trying to fly around the brooder.  Some of them do very well getting off the ground, lol!  Today we decided to place a wooden dowel in with them to see what they’d do with it and to my surprise they got the hang of perching on top of it withing a short amount of time.  In fact they are so proud of themselves and what they can do one or two of them will fly up on there whenever I come nearby as if to say, “look what I can do, Mom!”  Of course I squeal with delight and tell them how proud I am and what very smart little ladies I have. 🙂 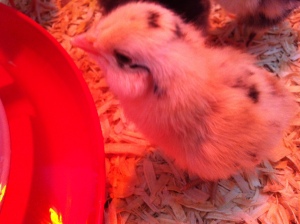 FINALLY!  My seven glorious baby chicks arrived yesterday at 7:30 in the morning.  I have been counting the days to their arrival and the closer the hatch date got the more nervous and excited I became.  When I picked them up at the post office and was handed this little chirping brown box I thought for a brief minute, “what have I done?”  Thankfully, by the time I got them into the car this wave of “motherly hen” took over me and I immediately started talking to the box to try to calm them.  I even sang to them all the way home thinking that might be of some comfort, lol!  When I got home my husband greeted me outside and we happily went in and placed the box inside our brooder.  I’m so glad I had already started the heat lamp and filled the water and food containers before I went to the post office.  When we opened the box all seven of them were clumped together in one corner chirping quite loudly at this point.  Once they were in the brooder a bit they seemed very happy to have more room to move about as they warmed up.  I dipped their beaks into the water like all the books say to do, but they still seemed a bit scared and unsure of everything so I just let them be and watched them.  It didn’t take long for one of the chicks to discover the food and within seconds all the other chicks joined in the feeding frenzy.  It took a little longer for them to start drinking, but not much longer.  After they ate and drank a little I checked each one for pasting up and all of their fluffy behinds were just fine, thank the Lord! I proceeded to watch them further and found their behaviors quite amusing.  Since they were only 2 days old they were still trying to find their footing.  My husband and I kept laughing at one of them who looked like a little drunk at times.  After a couple of hours they were all doing just fine except for one (my little diva, Speckled Sussex) who reminds me of a chipmunk.  She kept chirping loudly and no matter what I did I could not console her or figure out what she was trying to tell me.  Then all of a sudden she started woofing down the chick feed like no tomorrow and afterwards stopped chirping.  The silly thing was hungry and was too busy nosing about the brooder to eat.  She is VERY curious about everything, lol. 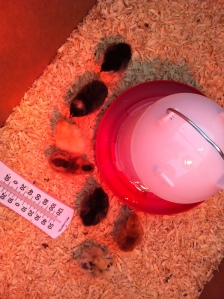 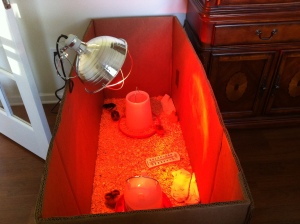 Here’s your belly laugh of the day:  I got up twice last night to check on my chicks.  I’m nuts, I know, and you know what I found out both times I crawled out of bed?  They were just fine and sleeping like babies! 🙂

Yes, folks, I was born a New Year’s Eve baby some “many” years ago!

In light of my special day today I’ve decided to share what books I am currently reading. An interesting compilation, you ask? Yes, indeedy! A girl’s gotta cover all her bases. 😉

I wish everyone a happy and healthy 2013. Stay safe and drive responsibly!

RIP: Dick Clark  We love you! 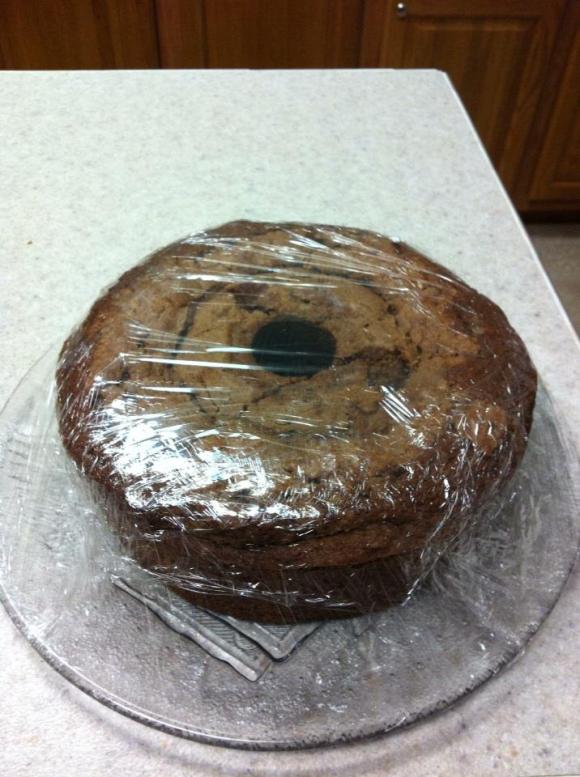 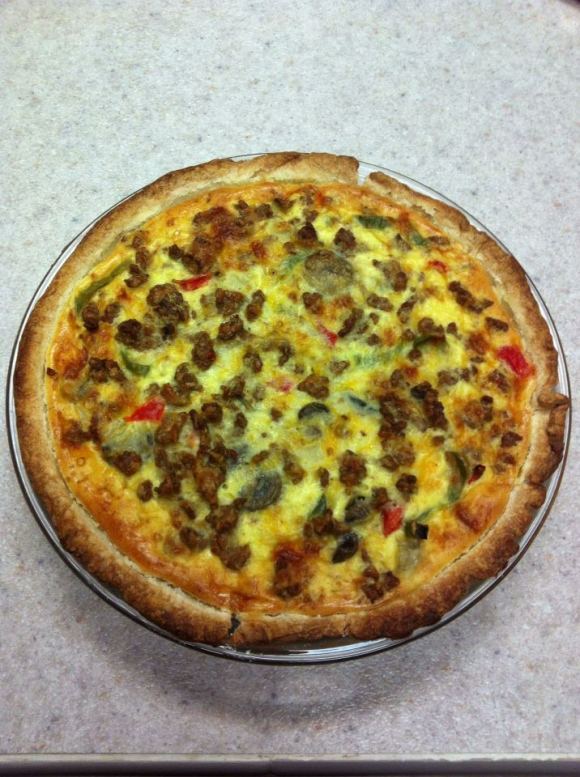 Quick update-my chicken coop arrived and is sitting in my dining room awaiting a good wood finish/sealant.  Can’t wait to get started!

Now on to the really good stuff!  I realized after cooking and baking for Christmas that I went through a butt-load of eggs.  My chickens will really come in handy next year 🙂  I thought I’d share a couple of recipes that I prepare EVERY Christmas for those of you who either (1) have chickens and need to use up some excess eggs and/or (2) just want to make something delicious!

In a skillet, cook sausage, chopping into small pieces.  Add mushrooms, onion and peppers.  Cook and stir five minutes longer until sausage is no longer pink and veggies are tender; drain well and set aside.  In a mixing bowl, beat cream cheese until smooth.  Gradually beat in eggs and cream.  Stir in cheeses, salt, pepper, nutmeg and sausage mixture.  Pour into pastry shells.  Bake uncovered at 400 degrees F for 35-40 minutes or until a knife inserted near the center comes out clean.

In large mixing bowl, cream together butter, Crisco and sugar.  Add the eggs, one at a time, in the same bowl.  In another bowl, mix together flour, cocoa and baking powder.  Start adding this to the large mixing bowl while alternating the milk in as well.  Be sure to blend well.  Add vanilla and mix.  Pour into tube pan and bake 300 degrees F for 1 1/2 hours. 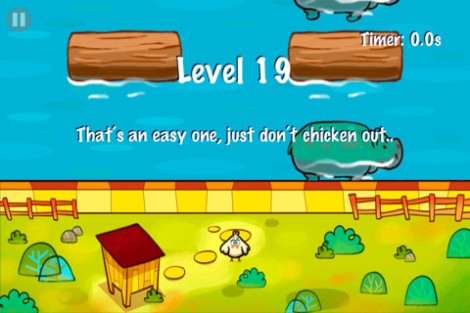 It’s official,  I’m a “street chicken” addict!  I downloaded this game onto my iPhone for free, off the iTunes app, and have not been the same since ;-).  The object is to get mama hen across the street, lake, or whatever to get to the other side and meet up with her chicks.  I’m on level 15 now and I’m not sure if I see any sort of feathery reunion happening any time soon, hee, hee.

On a happier note, my chicken coop is scheduled to arrive at my local freight line terminal this weekend so I’ll be able to pick it up the day after Christmas. Yay!

Ok, so after countless months of researching and scouring the internet, I finally decided on a chicken coop and ordered it this week.  It should arrive within two weeks; I’m so excited!  Not sure yet if I want to add wheels or what so that I can move it around the yard along with the electric poultry fencing I have yet to buy.  I didn’t go with a chicken tractor, which I did contemplate, because I wanted a bigger and more secure “home” for my feathered friends.  My baby chicks will not arrive until April 2013, so I have plenty of time to get all necessary supplies to get them off to a good start.  The crew will include a Rhode Island Red, Black Australorp, Barred Plymouth Rock, Golden Laced Wyandotte, Buff Orpington, Easter Egger, and Speckled Sussex.

one mother's journey through foster parenting

Stories about being a first time chicken owner, including building a coop and raising chicks

my mother raised the perfect housewife...then I went to med school

Chickens, Life, the Universe and Everything

Life in Cornwall with my Ex-Batt hens and other mutterings :o)

My Tiny Brood of Backyard Chooks